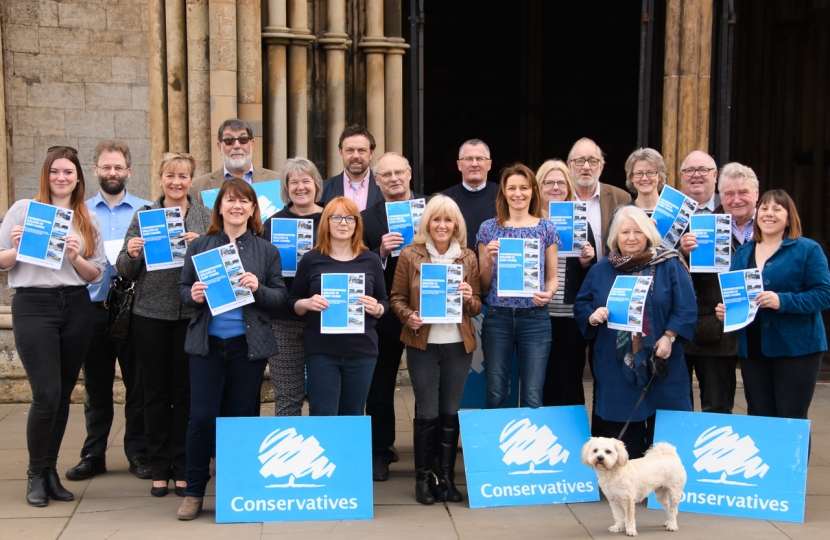 Conservatives have been working incredibly hard at a local level over the last four years to deliver the things that East Cambs residents told them, in the Conservative district survey of 2014, they wanted to see happen:

Further, under the East Cambs Conservatives’ preferred affordable housing policy, communities all over the district are setting up their own Community Land Trust, with the support of the Council, delivering new genuinely affordable homes reserved for local working people with ties to their community.

Conservatives have also worked with officers to bring the waste and recycling service back in house into a new company, East Cambs Street Scene, which saved around £240k in procurement costs and is delivering a vastly improved service to residents, 1,000 of whom have taken up the offer of a second blue recycling bin with no additional charge for emptying.

And thanks to our residents our district is now recycling the highest percentage of waste in Cambridgeshire - 63% in December 2018. The Street Scene crew has also been clamping down on fly-tipping, graffiti and litter and Conservatives have promised the Council will prosecute the criminals who carry out this environmental crime where it can.

Residents have also seen action on the A10 dualling project and the plan to reopen Soham Railway Station.

Cambridgeshire Conservatives at all levels of Government have united in a promise to protect road access for local residents in the North Ely rail junction upgrade.

East Cambs Conservatives have made these improvements and investments into services and infrastructure whilst freezing the East Cambs element of Council Tax for 6 years, with no cuts to services.

The Conservative Manifesto for the East Cambs District Council elections on 2nd May has been developed directly from residents’ responses to the second Conservative district survey which was delivered to everyone on the electoral roll in 2018.

Residents have asked for action on a number of issues that are not the responsibility of the District Council. However, East Cambs Conservatives have a reputation of getting other local authorities to deliver what our residents need, and the manifesto therefore includes promises to seek to influence other local authorities for action. This includes supporting the NHS with the delivery of a new Hospital at the Princess of Wales site in Ely, including a full Local Urgent Care Service and new GP provision; Conservatives have included this project on the District Council’s Infrastructure funding list.

Conservatives will always support our residents that drive and are therefore promising once again to retain free car parking in the Council’s city and town centre car parks - this is a policy that oppositions members have voted against in the past.  Free parking also helps to support the health of our High Streets.

Two new promises in the manifesto concern alternative transport options. If re-elected as the administration in May, Conservatives will use the successful Ely Zipper model to identify new bus routes and timetables and lobby the Combined Authority for improvements.

Conservatives have also worked with officers to draft the East Cambs Strategic Cycle & Footpath Network map. If re-elected we will consult on the map and seek developer contributions, infrastructure funding and other funding sources, to improve the network as a whole over time.

Deputy Leader of the Council, Anna Bailey said “The Council was in a very different place back in 2014 - we took difficult decisions about changes to the staffing structure and reductions in the number of Councillors. I truly believe we are now a nimble, dynamic, pro-active, forward thinking, entrepreneurial authority that delivers at pace for our residents. We are the smallest of the District Councils in Cambridgeshire, but we work incredibly hard and I believe we are an authority that others often look to. We have a balanced budget for the next two years and an ambitious delivery programme for the next four, which we have based on what our residents have told us they want to see. We would love to carry on delivering for our residents, but we can only do that if you choose us to represent you again.”

Conservatives in East Cambs have a proven track record of delivering what residents want.